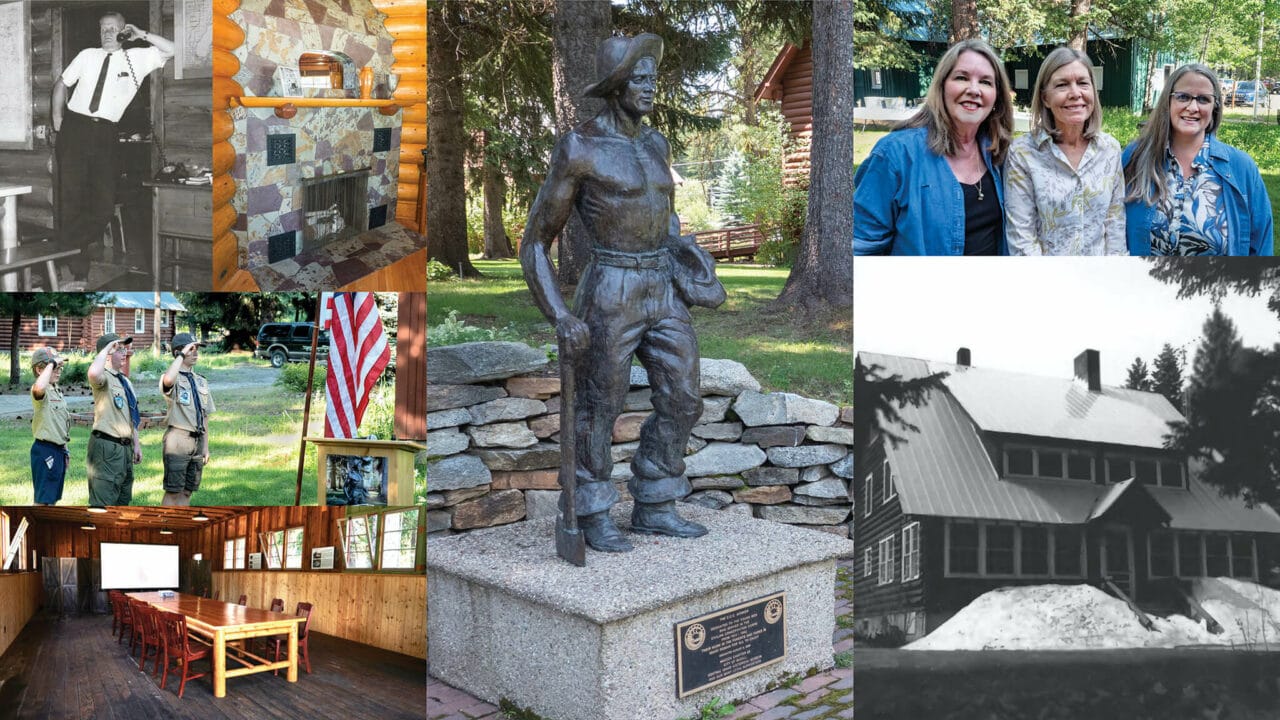 An Innovative Community Vision for an Historic Carpenter Shop

A new meeting space is bringing people into the historic SITPA site and immersing them in McCall’s history.

What should we do with historic buildings that have outlived their original purpose? Many that escape demolition have a second life as museums and serve other educational uses. There are increasingly more buildings in jeopardy than there is demand for new museums, however, which means preservationists need to be more creative with their projects to help stave off developers and garner public support. Walt Sledzieski, a board member of Idaho Heritage Trust and the Central Idaho Historical Museum, had a unique vision to turn the historic Carpenter Shop on the Southern Idaho Timber Protective Association (SITPA) into an all-purpose venue and meeting space. The project not only fills a specific need for the McCall community, but also breathes new life into a building that was on the verge of literally falling apart.

Tucked in the woods just across Lake Street from Payette Lake, the eight historic buildings that populate the four acres of the Southern Idaho Timber Protective Association (SITPA) site have stood since the late 1930s. Perhaps the most unassuming structure on the SITPA site, the Carpenter Shop was one of the first buildings constructed in 1937 by the Civilian Conservation Corps. A simple, uninsulated 20×40 structure, the shop was integral in both building the other structures on site, as well as the creation and maintenance of the many lookouts, fire wagons, and firefighting tools used by SITPA for decades. Unfortunately, by 2019 the shop was in danger of collapse. At some point in its lifetime, workers converted one end of the space into a storeroom, installing a wall and drop-ceiling to store lumber. In the process they removed seven of the truss chords that ran the width of the building, supporting the roof and holding the building together. Over the years, the weight of the roof and the lack of support caused one of the walls to splay out nearly 3 inches and the whole building was in danger of imploding.

While it was clear the shop needed structural attention immediately, the ultimate purpose for it remained unclear. It was most recently used for storage by a bicycle refurbishing non-profit, but that did not necessarily fit with the site’s charter. “The last thing we want to do is restore something and lock it up,” says Walt, speaking to his inspiration for this project. Walt looked to the needs of the McCall community in devising a new use for this unique piece of Idaho’s history, noting a dearth of meeting spaces open to the public. Given its idyllic location, Walt envisions the Carpenter Shop as a lovely place to hold corporate and creative retreats, book readings, board meetings, and other community events.

With the help of the Idaho Heritage Trust, Walt was able to pay for supplies and labor to repair the building. They installed new trusses, fasteners, and roof framing to make the building structurally sound, and redid the wiring and lightning to accommodate more modern uses. Walt himself removed all twenty windows, refinishing and reglazing each one, and painstakingly oiled the original floor, as well as adding new wainscoting to dress the space up a bit. New narrative panels and 1935 maps were put in to help tell the story of the lookouts in the area. Over the winter, Walt purchased 50 or so chairs, AV equipment, and period-accurate tables. On May 26, 2021, the ribbon was officially cut on the renovated Carpenter Shop during a festive celebration of SITPA’s contributions to Idaho’s robust forestry heritage. In attendance were Idaho’s First Lady Teresa Soulen Little, SITPA’s Chief Fire Warden Paul Wagner, McCall Mayor Bob Giles, as well as representatives from the Historic Preservation Commission, the City of McCall, and members of the boards for the Central Idaho Historic Museum and the Idaho Heritage Trust.

“The importance of these buildings is not just for the past, but the future as well. These buildings can provide tremendous value to the community going forward,” Walt reflects. In this way, the repurposed shop will help attract people to the SITPA site and McCall in general, while proceeds from renting the space will go directly to support the Central Idaho Historical Museum. And by restoring the building instead of creating a new structure, the Carpenter Shop will still accurately represent an important portion of Idaho’s history.

At the turn of the 20th century, central Idaho’s thriving timber industry was threatened by a rash of devastating fires. Individual landowners did not have the means necessary to deal with fires on their property, which then posed a threat to their neighbors, as well. They came together to form SITPA in 1904, pooling their resources to fight fires throughout the area, regardless of individual land ownership. Fire lookouts were installed across the countryside, and fire chasers would track thunderstorms on horseback, looking for lightning strikes and trying to snuff out any fires they came across before they became dangerous. By 1935, about one hundred fire lookouts dotted the landscape. In order to better coordinate and support SITPA’s firefighting efforts, the site was built and remained active until being decommissioned in the early 1980s. The Chief Fire Warden for the area is still based in McCall, though they now operate out of a modern office.

Preserving such interesting and important pieces of Idaho’s history might seem like a foregone conclusion, but that was not always the case. After being decommissioned, the fate of the property sat in limbo for the rest of the decade. McCall was going through a period of growth, and several developers had their sights set on the picturesque location. A few other historic landmarks in the area had been lost to development, such as the Payette Forest Station and Tom McCall’s original homestead, and it seemed like the SITPA site would be next. However, a group of concerned citizens incensed at the loss of historic landmarks worked with McCall City Council to have the property deeded to the city with the stipulation that it be used for historic preservation. All eight of the structures were listed on the National Register of Historic Places in 1990, and the impressive Fire Warden’s House has been repurposed as the Central Idaho Historical Museum.

The Carpenter Shop now enters the next chapter in its existence as both an historical artifact and a valuable community resource. If you are interested in securing the use of the Carpenter Shop for an upcoming event of yours, you can contact the Central Idaho Historic Museum here.